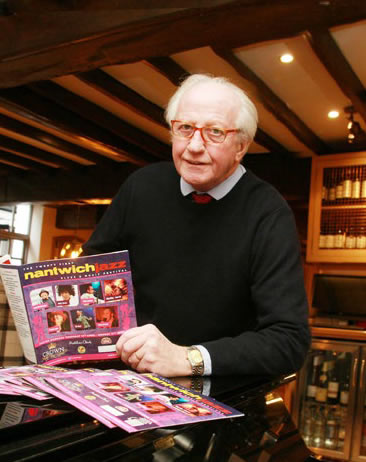 The Nantwich Jazz, Blues and Music Festival is the brainchild of the late Phillip Martin, proprieter of The Crown Hotel. Phillip spent his working life in hospitality and entertainment. He was also an established music promoter and, after a visit to Howth, Ireland in 1996, a town which held a music festival incorporating their many pubs and bars he saw a massive potential for a similar enterprise in Nantwich.

Bearing in mind that in the mid-nineties Nantwich at Easter was not exactly thriving, in fact it was almost deserted, Phillip’s idea was met with very little enthusiasm and comments such as “You want to do what ?” and “It’ll never work” were often heard. However, undaunted in his determination to fill the town with live music, with the support of a few venues and with an evening line-up in The Civic Hall the Festival was born.

This proved to be a winning formula and one which grew and prevails 24 years later. A fitting testament to a man who saw an opportunity to bring us live music and made it happen. Starting with mainly Jazz Artistes, hence the festival being known to present day as “The Nantwich Jazz”, the event grew year on year with more participation, better bands and more visitors. Phillip saw the benefit of adding the Blues Music genre to the line-ups which not only broadened the Festival’s appeal but started to gain it national recognition. Eventually the Festival opened the doors to bands from all persuasions thereby growing into it’s current incarnation of “something for everyone” .

The Festival has also been instrumental in giving the stage not just to large well established bands, but local artistes who relish the opportunity to perform to a large “home” crowd and it is quite often the highlight of their year.

Totally dedicated to the project and  despite ill health, Phillip was working on the 2018 festival right to the end.  What you see in Nantwich every Easter is the legacy of his work. Taken on by his daughter, Abbigail and with help from the long established organising team it’s success is assured.  So, perhaps when you are enjoying a band and maybe a drink please reflect on Phillip. The man who made it all possible.

Just some of the bands and artistes that have appeared at The Festival since the beginning.

Plus over 2000 fantastic bands who played in Nantwich Pubs and venues from all around the country.